We are committed to the safety and health of all Worldwide Employees and Customers and will be following all guidelines of the World Health Organization (WHO), Centers for Disease Control and Prevention (CDC), Public Health England and applicable local governments. During this time all our global teams will be following Work-From-Home directives and will continue to work normal business hours. We apologize for any delay in responses and appreciate your understanding.

TAPI is a Microsoft defined API and stands for Telephony Application Program Interface. The PHONE-LiNK TAPI driver allows a PC to monitor and control extensions on a Ericsson-LG communication system while providing a TAPI interface to a TAPI compliant application.

TAPI is most frequently used by application developers so that they can build telephony features such as screen popping and click to dial natively into their applications.

The PHONE-LiNK product team are very experienced in the provision of TAPI drivers and have worked with a large number of TAPI compliant applications, often assisting application developers with their own implementations. When combined with a proven CTI interface it makes for an effective and reliable product.

PHONE-LiNK can provide client side (1st party) and server side (3rd party) TAPI drivers.
The driver is available for use with any TAPI compatible application.

A list of previously installed TAPI compatible applications integrations is maintained.
Proprietary APIs are also available. These are designed for use by application developers who want to add CTI to their application but would prefer not to use TAPI.

Integration features are provided by the application not PHONE-LiNK. 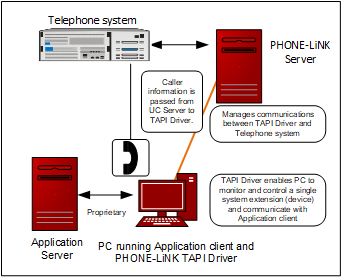